Silly Rabbit, Cynicism Is for Losers! 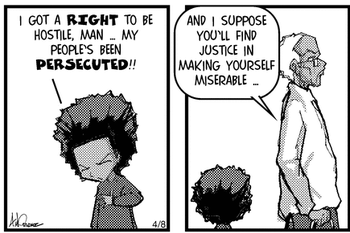 Joker: It's all a joke! Everything anybody ever valued or struggled for... it's all a monstrous, demented gag! So why can't you see the funny side? Why aren't you laughing?
Batman: Because I've heard it before... and it wasn't funny the first time.
— The Killing Joke
Advertisement:

Here come The Cynics, sporting a nice pair of Jade-Colored Glasses, and when average people, especially the Wide Eyed Idealists, call them out on it, they are quick to claim that I Did What I Had to Do, or Silly Rabbit, Idealism Is for Kids! They are strongly convinced their attitude is inherently more logical and realistic, and that those without it are supposedly too childish to accomplish anything. As far as they're concerned, altruism kindness, compassion, and selflessness are only for fools and will only hinder you and get you taken advantage of, and open displays of it are, at best, hopelessly naive, and at worst are hollow and performative, attention-seeking displays. According to these cynics, we live in a Dog-Eat-Dog world where everyone either has a hidden dagger or is too naive and deluded to realize it, and the only way to succeed is to carry a bigger dagger and have a faster hand.

These cynics, however, are wrong. Their pessimistic and negligent attitude ironically made them turn lazy, cruel and selfish themselves. They're wasting their entire philosophical intellect and strength of character in their lamentations. In their sheer apathy, they have often actively allowed otherwise manageable problems to ferment and fester into full blown crises and Crapsack Worlds, all while missing several golden opportunities to make the world a better place due to constantly thinking about themselves alone in the Despair Event Horizon for all eternity. And in some cases, these misanthropes have even actively made the world a worse place by falsely assuming that everyone was out to screw them and thus opting to screw over and exploit everyone else first. They thus prove themselves to be just as dogmatic, narrow-minded, and damaging as they think the overtly idealistic characters are. All while soothing their egos with an unearned sense of superiority, claiming they're being "realistic" for wallowing in defeatism rather than taking a risk to change the situation they claim to despise so much. These characters are often summarily called out for their wangst precisely because of this. Fittingly, it tends to be done by the very people that the cynic had regarded as fools. It can also happen when an old-fashioned or young character tries too hard to be what they think an adult is, like a Perpetual Frowner.

This trope is the Inversion of Silly Rabbit, Idealism Is for Kids!, showing that being extremely cynical is not exactly better. Yes, extreme idealism does tend to result in stupid decisions and disasters, but extreme cynicism results in laziness, negligence, cruelty and callousness, and is just as bad, if not even worse, than its idealistic counterpart. This is to show that The Sliding Scale of Idealism Versus Cynicism does not always stick to one end, but tends to lie somewhere in the middle, and that you need a bit of both to really see the world for what it is. Can be a trait of The Anti-Nihilist or the Knight in Sour Armor, and used to deconstruct the Straw Nihilist mentality.

The argument can however be abused if it's used to stifle legitimate protest, such as when someone justifiably complaining about some social ill is told to shut up and stop ruining everyone's fun — or, worse yet, blamed for the misfortune, or it can also be used to demonstrate a character's naivety. It can also meet somewhere in the middle, as the character doing the calling-out may be overly idealistic and may be oversimplifying the situation but still has a good point, while the cynic may be doing the same about the idealist having an overly sunny view of a truly bad situation. The general consensus however is that the trope is justified to be applied if, after understandably complaining about a legitimate and serious problem, the cynic then uses the same argument as an excuse to either do absolutely nothing about the situation, or to do something horribly selfish and cruel that makes the problem even worse.

See also Sour Supporter for character types that can fall into this. May invoke Good Is Not Dumb. A subtrope of The Complainer Is Always Wrong if this means that characters who don't agree with idealists are frowned upon. Often overlaps with Wangst, typically when the character is using it as an excuse for inaction, or when they are immature and conflate extreme pessimism and nihilism with maturity.