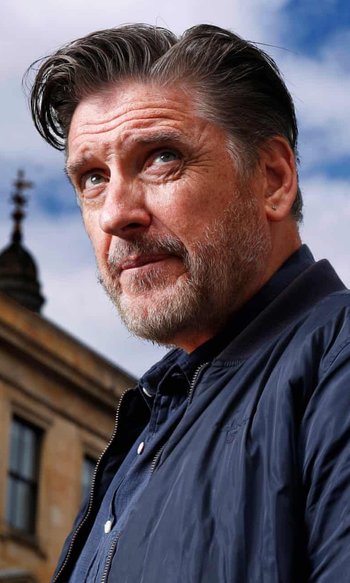 Keep Bangin' On.
"It's a great day for America, everybody!"
Advertisement:

Craig Ferguson (born May 17, 1962 in Glasgow, Scotland) hosted The Late Late Show with Craig Ferguson on CBS from 2005 to 2014 and is the author of the books American on Purpose and Between the Bridge and the River. Besides his former post behind (and in front of, and sometimes on top of) the desk of The Late Late Show, he is best known as Drew Carey's evil boss Mr. Wick on The Drew Carey Show. He has also appeared in several films including Saving Grace, The Big Tease, I'll Be There, and A Series of Unfortunate Events, and has voiced animated characters such as Roddy MacStew in Freakazoid!, Gobber the Belch in How to Train Your Dragon and How to Train Your Dragon 2, Nos-4-A2 in Buzz Lightyear of Star Command, Samuel T. Philander in The Legend of Tarzan, Nat in The Hero of Color City, Owl in the 2011 Winnie the Pooh feature, and Lord Macintosh in Brave.

Craig was born in Glasgow, Scotland, and thus began his career in the UK doing stand-up comedy under the name Bing Hitler. (He is now a naturalized American citizen, and self-identifies as American rather than Scottish or British.) He was in an early episode of Red Dwarf in 1988 ("Confidence and Paranoia") as Confidence, who killed himself by trying to breathe in space. He also appeared on the UK panel game Have I Got News for You and the American game Million-Dollar Password.

Ferguson has also been open about his history of alcoholism and drug addiction, telling stories both in his comedy and on his talk shows about how he nearly destroyed his life. He's since become an advocate for recovering alcoholics and drug addicts, and when Britney Spears had her drug fueled freak out in the late 2000's, Craig was one of the few late night comedy hosts who didn't make fun of her for it, citing his own similar struggles (though he's more than happy to make fun of his own drug fueled freak outs).

He has a passion for history and science, he is a big fan of the MythBusters (Grant Imahara built him a robot skeleton sidekick, in gratitude for helping him expand his Twitter fanbase), and was also the 2010 host of Shark Week for the Discovery Channel. He's also a bit of a Doctor Who fan, and a toy TARDIS was prominently displayed on his late-night show's desk for several years - coincidentally, he is also a lifelong friend (and former bandmate of) the Twelfth Doctor, Peter Capaldi. He shares great chemistry with Kristen Bell, so much to the point where she made so many appearances on his show that she openly lobbied to become co-host, although this never came to be. (In later appearances, she created a false rivalry with Geoff Petersen, the robot built by Imahara.) He also hosted the Boston Pops' Fourth of July show from 2009 to 2012, and on April Fools' Day 2014 he swapped places with his friend and former costar Drew Carey to host The Price Is Right. He ended his tenure as Late Late Show host on December 19th, 2014.

Ferguson hosted the syndicated game show, Celebrity Name Game, which launched in September 2014, for which he won a 2015 Daytime Emmy Award note while he did win a Peabody award during his time on The Late Late Show, he never won an Emmy. He also hosted a series, Join Or Die, for the History Channel

which began airing in February 2016. In February 2017, he launched The Craig Ferguson Show, a two-hour radio talk show on the Comedy Greats channel on Sirius XM Satellite Radio.

Ferguson announced in 2014 that he was going to produce a series based on the I F**king Love Science blog, curated by Elise Andrew, for the Science Channel, but it is currently stuck in Development Hell.
He is currently the host of ABC's game show The Hustler.