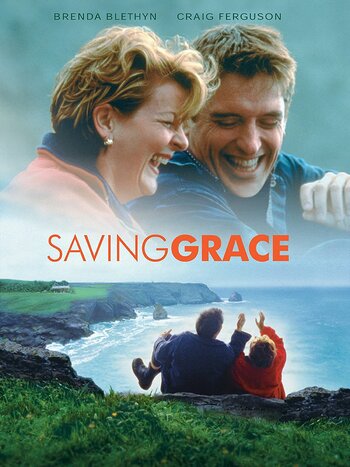 Take the high road to a comedy that truly lights up
Advertisement:

After her husband John’s suicide, newly widowed Grace Trevethyn, an avid gardener, discovers that she has inherited his significant debt. Moreover, the banks are ready to foreclose on her beautiful and historic house; in fact, they have already begun repossessing her furniture. Unwilling to leave her charming seaside town, her employment prospects are dim (even if she had a trade, her debts are substantial). Grace is given emotional support by the town's inhabitants, particularly her loyal, pot-smoking gardener Matthew Stewart and his girlfriend, the fishwoman Nicky. Rounding out the cast of quirky townsfolk are Nicky's fellow fisherman and Grace's boarder Harvey, and the stoner Dr. Martin Bamford. Despite wanting to help Grace save her home and livelihood, none are able to find an immediate solution to Grace's plight.

Her Saving Grace comes in the form of a midnight trip to the town vicarage when Matthew, who Grace has reluctantly fired after her riding mower is repossessed, asks Grace's help reviving some plants he's been secretly growing in the vicar's backyard. Upon discovering that they're hemp plants, Grace brings them back to her greenhouse since she's aware they need more light. Her prowess as a gardener shows itself as Matthew's plants quickly yield a massive amount of product. Grace and Matthew quickly realize that they have a way to get Grace out of her financial straits, and Matthew his job back. However, the modest country widow may be in a bit over her head . . .

This plot may remind you of a more lighthearted version of a certain TV show. Not to be confused with the American Supernatural Cop Show.

Also, this film is notable in that it's where the character of Doc Martin originated.

Grace: “Matthew… will you give me one?”
Matthew: “what?”
Grace: “I want to know what it feels like… please”
Matthew: ”…”
Grace: “I mean if I’m growing it and selling I should know the effect it has”
Matthew: (Sighs with relief)