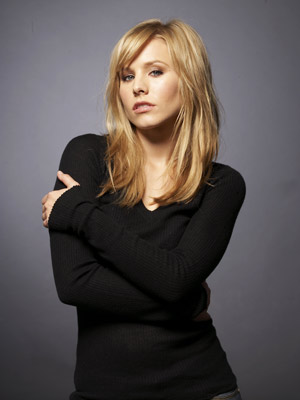 "You know you love me..."
Advertisement:

Kristen Anne Bell (born July 18, 1980 in Huntington Woods, Michigan) is an American actor. She is best known for playing Veronica Mars in Veronica Mars, Sarah Marshall in Forgetting Sarah Marshall, Lucy from Assassin's Creed, Gossip Girl in... well, you know, Princess Anna in Frozen, and Eleanor Shellstrop in The Good Place. She is married to Dax Shepard of Punk'd and they have two daughters, she also became good friends with Craig Ferguson after she was a guest on The Late Late Show with Craig Ferguson and frequently guest starred on show.