Film / When in Rome 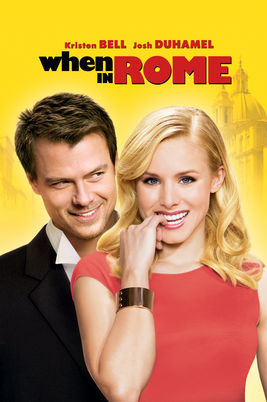 Beth (Kristen Bell), a successful, single and clumsy woman, has been waiting for Mr Right for years but love is a luxury she can't afford and she's been left extremely bitter. She flies to Rome for her younger sister's impulsive wedding and meets Nicholas (Josh Duhamel), a lovely yet equally clumsy man, and they hit it off. Just as Beth decides to get romance another go she sees him kissing another woman, the groom's "crazy cousin".

Drunk and angry, Beth picks up coins from the "fountain of love" and later learns from her sister, Joan, that legend says if you pick up another person's coin from the fountain that person will fall in love with you. The legend is true.

She is followed back to New York by a band of would-be lovers who have all fallen in love with her due to the spell. They are: Al, a sausage maker (Danny DeVito), a street illusionist named Lance (Jon Heder), a doting painter named Antonio (Will Arnett), and a narcissistic male model Gale (Dax Shepard). She also meets up with Nick again and slowly falls for him, only to realise that one of the coins (a poker chip) belongs to him.

There are two ways to break the spell: return the coins to the owners or to the fountain.