Film / What We Did on Our Holiday 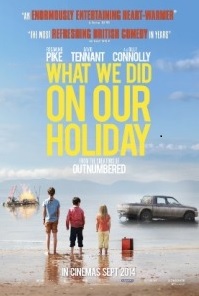 On holiday you can get away with pretty much anything
Advertisement:

A 2014 film from the creators of Outnumbered.

It's the holidays, and the Mcleod family are making their way to the Highlands for granddad Gordie's 75th (and possibly last) birthday party. Doug and his soon to be ex wife Abi arrive with their three children in tow: Lottie, who scribbles repeatedly in her notebook so she can remember which lies she is supposed to tell; Mickey , who is obsessed with Vikings; and Jess, whose best friends are a rock and a half a breezeblock named Eric and Norman.

The house belongs to the Doug's self-obsessed brother Gavin, and the party is to be the do to end them all. Family tensions surface, arguments begin, and Granddad escapes the preparations and heads to the beach with the children.

Not to be confused with Fairport Convention's album What We Did On Our Holidays.