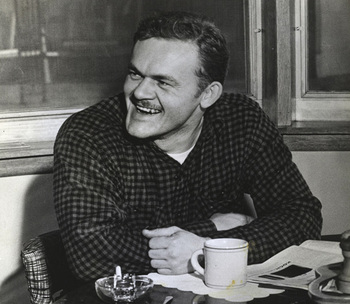 Jones was born and raised in Robinson, Illinois. He enlisted in the Army at age 18, and was thrown right into the middle of the Big War, which would give him quite a bit to write about. He witnessed the Japanese attack on Pearl Harbor, which led to his first published novel, From Here to Eternity. The Thin Red Line reflected his combat experiences on Guadalcanal. His last novel, Whistle, was based on his hospital stay in Memphis, Tennessee, recovering from his wounds received on 'Canal. (These three books are frequently referred to as his "war trilogy.")

His second published novel, Some Came Running, is a very thinly disguised autobiographical novel of his experiences in Robinson after World War II. He actually wrote it before Eternity, but it was released later.

Both Eternity and Running were made into critically acclaimed films during the Fifties (both starring Frank Sinatra; he won an Oscar for Eternity), and The Thin Red Line was put to film in 1964, then again in 1998 by Terence Malick, who was inspired to get off the bench after 20 years of inactivity by Jones's novel.