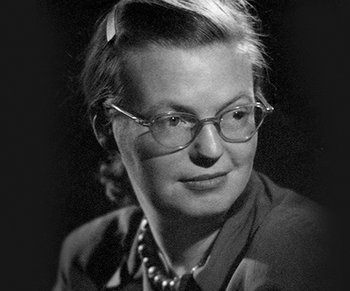 "I delight in what I fear."
Advertisement:

Shirley Hardie Jackson (December 14, 1916 – August 8, 1965) was an American author known for her dark stories of mystery and horror.

Jackson was a master of understatement and implication, creating chilling Fridge Horror from what would start out looking like your average New Yorker story. Her best-known work is "The Lottery", about the dark underside of American small-town life, which frequently turns up in high school anthologies and has been adapted to the screen three times. Her novel The Haunting of Hill House has been adapted for film twice, and several of her other works have been adapted for the stage or screen. She only wrote about half-a-dozen novels, but was a prolific short-story author. She also wrote humorous stories about her family, mostly based on reality.

Stephen King paid homage to her in his dedication to Carrie: "To Shirley Jackson, who never had to raise her voice." Carrie's shower of rocks in the first few pages is a Shout-Out to Eleanor's in The Haunting of Hill House.

The 1957 film Lizzie was adpated from her novel The Birds' Nest. (Badly, and Jackson said it was like "Abbott and Costello Meet a Multiple Personality.")

In 2007, the Shirley Jackson Award for outstanding achievement in psychological suspense and dark fantasy was created in her honor. The film Shirley, about the writing of Hangsaman (starring Elisabeth Moss as Jackson), was released in 2020.