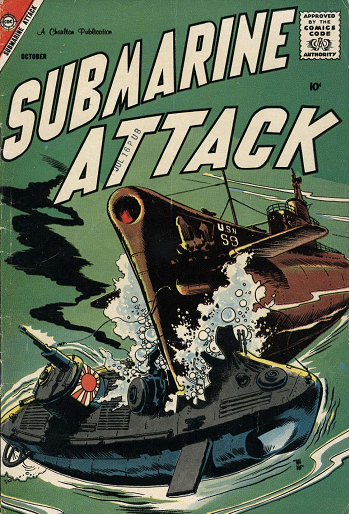 Actually, to the best of our knowledge it has happened just once, during Operation Caesar, when HMS Venturer sank U-864 while U-864 was transporting important war materiel, vehicle blueprints and technical experts to Japan.

But if you were to believe Hollywood, it's a regular occurrence. No matter what war or what type of subs are involved...they will be fighting underwater.

During World War I and World War II, submarines were almost entirely episodically submersible torpedo boats, obliged to run on the surface using their air-breathing engines (mostly diesel-electric propulsion systems) for higher speed, greater endurance, and to charge the batteries that allowed them to maintain steerage and very slow speeds underwater. While surfaced, submarines were just as vulnerable to torpedo attacks made by submerged enemy submarines as any other vessel, but because of their lower profiles (small conning towers, decks almost awash) were difficult to detect visually, and thus were rarely attacked by enemy submarines—though this did happen occasionally, with US, British, Japanese, and German submarines notching confirmed kills on surfaced enemy subs.

That said, it does reflect actual military doctrine despite the sparsity of major naval conflict since World War II. This is because due to the nature of water acoustics and sonar a submarine has the best chance of successfully detecting another submarine as other real time methods are comparatively deaf. Whilst the crew of the Venturer only had paper, pencils and decent maths skills to plot a firing solution, modern subs have computers and advanced homing torpedoes - had the Cold War turned hot after the 1960s (not before then), there certainly would have been underwater submarine battles—and in fairness, that is when a large number of such sub battles are set (thank you, Tom Clancy!). NATO and Warsaw Pact submarines followed each other about all the time. Current American naval doctrine is to have each carrier battle group (structured around a Nimitz- or Gerald Ford class supercarrier) accompanied by two nuclear attack submarines (SSN) which include enemy sub-killing in their tasking - these are generally known as "Hunter-Killer" submarines. In fact, it's often said that the best defense against submarines in modern warfare is your own submarines, as they can dive beneath thermocline layers that hostile subs would use to hide from surface shipsnote  The advent of towed sonar arrays has allowed destroyers and similar ships to stream their "ears" beneath the layer, while devices like the US Navy's Prairie Masker system make them much harder to detect, closing the gap considerably. However, submarines remain inherently more stealthy than anything that stays on the surface.

If you were looking for the other kind of "sub", we don't do that here - the much cleaner Twice Shy is about as close as you'd get.

Hidden killers that surface only to fire. Nothing can withstand their torpedoes for long.

Hidden killers that surface only to fire. Nothing can withstand their torpedoes for long.