Use Their Own Weapon Against Them 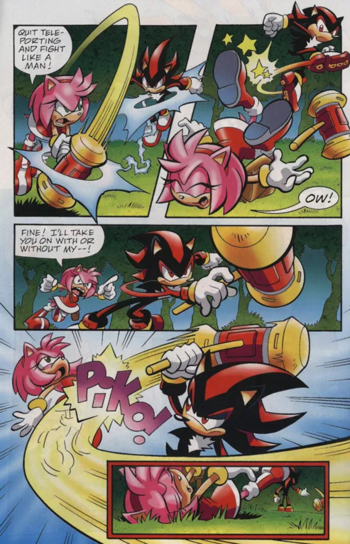 Drop the Hammer, Shadow! ...No, not like that.
"How does it feel to be killed by your own gun?"
— Killer Bean (to Bad Bean 1), Killer Bean Forever
Advertisement:

In battle, disarming an opponent of their weapon is an obviously good tactic. Some highly skilled fighters might take it a step further and use or maneuver that very weapon against the opponent. This can be done for a variety of in-story reasons, from pragmatism to giving the opponent an ironic defeat.

This trope often but not always results in the opponent being defeated or killed by their own weapon. The character who disarmed them will usually use the weapon to perform the coup de grâce in the climax of a long and intense fight. The winner might keep the opponent's weapon as a trophy or discard/destroy it afterwards.

Summon to Hand, Loyal Phlebotinum and Only I Can Make It Go are ways to avert this.

Compare Mid Fight Weapon Exchange, Hoist by His Own Petard and Beat Them at Their Own Game. Also compare Disarm, Disassemble, Destroy when a character disables their opponent's weapon after relieving them of it. See Catch and Return for when a character has their weapon thrown back at them as opposed to having it taken or maneuvered against them or Lodged-Blade Recycling for when a character uses removes a weapon they were stabbed with and uses it. See Vehicular Turnabout for the vehicle version of this.