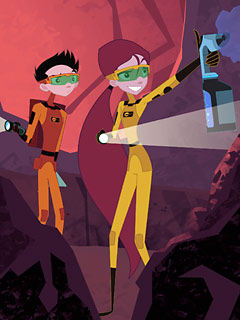 Abby: Slime? Nice.
Ty: But the question is, what kind of slime?
Abby: Who cares? It's slime. It's all good!
Advertisement:

It's a gross world out there, filled with slime molds covering the walls, parasites after your blood, and rotting animal carcasses on the side of the road. Heck, you're gross! You're filled with mucus and feces, you constantly sweat, are covered in dead skin cells and scabs, and who knows what creepy bacteria is living on you (and in you) right this very second? All that's enough to make one want to vomit. Maybe while also giving yourself a bad case of diarrhea to purge your system both ways... And now you're telling us that there are people out there who want to weaponize all of this body fluid and excretion nastiness? Can we get someone without a gag reflex to clean up this mess, please?

Loosely based on author Sylvia Branzei's series of children's non-fiction books and educational games of the same name, Grossology is a Canadian animated Edutainment/Gross-Out Show from Nelvana that follows the adventures of siblings Ty and Abby Archer, teenage secret agents with iron stomachs and a love of all things nauseating. The two work as "grossologists" for the titular Department of Grossology, a secret government bureau that handles all the problems that everyone else doesn't want to get anywhere near. Namely villains that have anything and everything to do with bodily fluids and excretions, weird medical issues, and unnerving organisms like parasites. Helping our field agents out are Lab Rat, whose anxiety and dislike of bathing keep him even leaving the laboratory, and The Director, who probably got Kicked Upstairs considering his poor constitution in the face of even the more mundane crime scenes.

The show was developed for television by cartoon writers Simon Racioppa and Richard Elliot (later to be known for Spliced and Fangbone!), with Sylvia Branzei serving as a creative consultant during production. It originally premiered new episodes from 2006 to 2008 on YTV, but also aired in the United States on Discovery Kids, and Qubo, running for a total of 52 episodes over 2 seasons. The entire series can be viewed for free on Nelvana's "Keep It Weird" Youtube page

VK's main tic is referring to himself in the third person, which Ty lampshades.

VK's main tic is referring to himself in the third person, which Ty lampshades.