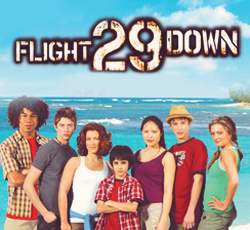 Flight 29 Down (2005-2007) was a live-action television series, created by Stan Rogow and D. J. MacHale and broadcast by Discovery Kids. In a nutshell, take the premise of Lost and replace the utterly screwed up main characters, the Mind Screws, and the Epileptic Trees with angsty teens, high school drama, and idealism cranked to eleven, and you basically have this show.
Advertisement:

In other words, the Coral Island to Lost's Lord of the Flies.

Aired on Discovery Kids for two seasons before getting cancelled. A Made For TV Movie was made to tie up loose ends and to conclude the series. It also had a series of tie-in novels that delved deeper into the plot and characters.