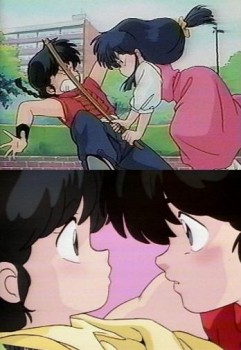 Aw, Look! They Really Do Love Each Other!
"Wonderful girl! Either I'm gonna kill her, or I'm beginning to like her!"
— Han Solo about Princess Leia Organa, A New Hope
Advertisement:

This can even be true in established long-term relationships; see Like an Old Married Couple. If the whole relationship is defined by the belligerence, it can become The Masochism Tango. If a pair of outright enemies has this sort of attraction, it's a case of Foe Romance Subtext and when it ultimately goes from subtext to text, then it's Dating Catwoman. See also Power Dynamics Kink, Slap-Slap-Kiss, No Accounting for Taste, Well, Excuse Me, Princess!, Defrosting Ice Queen, Love at First Punch. If we're lucky, at the end we may get to see a moment of Aw, Look! They Really Do Love Each Other. See Bickering Couple, Peaceful Couple where this couple is a foil to the other couple who doesn't fight and argue.