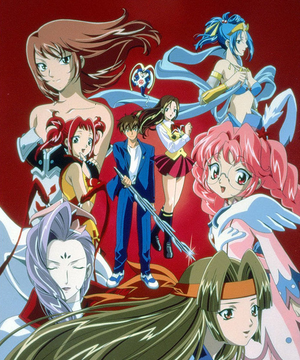 Legend of Himiko is a 12-Episode Anime series, manga book, and PlayStation game (of the Adventure and Dating Sim sort). All three were released in early 1999. The manga and character design were by Oh! Great.

The nation of Yamatai is under threat from the overseas kingdom of Kune. In an attempt to stave off an invasion, the people of Yamatai attempt to install a Queen to rule over their kingdom, which is to be chosen by the mysterious Bokka. However, the Kune army attacks Yamatai before the selection of the Queen can be completed, and the Bokka disperse the six queen candidates across the nation. The Bokka themselves take shelter in a newborn girl named Himiko and the pendant she is wearing and transport her to modern times, where she is found by a boy named Masahiko Kutani.

Years later, an adolescent Himiko and her stepbrother Kutani are checking on some ruins and are suddenly spirited away to Yamatai, now under Kune rule. There they'll learn about Himiko's heritage, meet the other queen candidates, and start fighting for the freedom of Yamatai.

This anime/manga provides examples of: