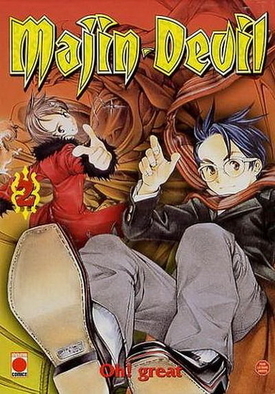 The creature standing on top of the evolution system isn't human, but a creature named The Majin. Majin Devil is a story about a young nerd who fights against monsters of all sorts, and eventually faces Majin, who wants to take his body.
Advertisement:

Majin Devil is a shonen manga series by Oh! Great, which was serialized in Magazine Special from 1999 to 2001 and compiled into two volumes.