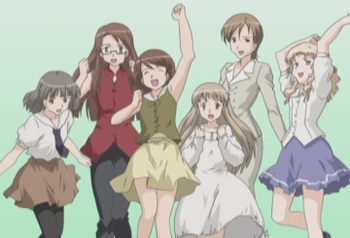 Do you know the legend of the diamond dust? They say if you see it with the one you love, the two of you are guaranteed to be happy together.
Advertisement:

Atsuko, Karin, Kyoko, Suomi, Shoko and Akari live in different cities on Japan's northern island of Hokkaido. The girls have very diverging life styles, but they all share the belief in the mythical properties of "diamond dust", which occurs when pretty floating ice crystals form in freezing air.

The anime, also known as Kita e ~Diamond Daydreams~ or Kita e ~Diamond Dust Drops~, was released in 2004 and is loosely based on the Kita e series of visual novels by Red Entertainment. The stories, with little to no overlap between them, depict the girls' moments of happiness and hardship, mostly regarding feelings of love. In most cases the girls' feelings involve a man, although two stories deal with friendship and family relations.

All of the girls become stronger and more independent through their experiences, which gives the series a very positive feel.