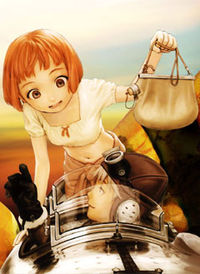 "What lies beyond the furthest reaches of the sky?"
Advertisement:

Claus and Lavie are "vanship" pilots who work as air mail couriers using the vanship that their respective parents left to them. It's a hard, dangerous living, and they must risk their lives to earn enough to soup up their vanship enough to be a contender in the air races. One day, however, just as they're finally about to win a race, a crippled vanship crashes right in front of them. When they go to its aid, the dying pilot begs them to take over his delivery job: safely deliver a mysterious young girl to the legendary pirate ship Silvana.

Naturally, the same force that was pursuing the girl- The Guild, an organization ruled by the power-hungry Maestro Delphine Eraclea- now turns their sights on Claus and Lavie, who find themselves at the center of a conflict that threatens to tear their world apart.

A manga on the series was also serialized in Newtype Ace. Entitled Sunadokei no Tabibito (literally Travelers from the Hourglass), it serves as a bridge between Last Exile and its sequel, explaining what happened to the original cast and how they figure in the conflict engulfing the world in the new series.