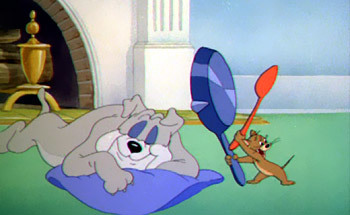 "We're banging pots and pans
To make you understand!
It's the song I hate."
— Sonic Youth, "Youth Against Fascism"
Advertisement:

Want to get someone's attention, especially if they're sleeping? Banging pots and pans will certainly do.

Alternatively, it may be used to signal that it is time to eat. In real life, it's becoming common for women to stand up against violence by doing this, as it confronts the violent person indirectly but clearly.

Compare Trash Can Band, when this is done for music, and Paper-Bag Popping. Contrast Frying Pan of Doom, which is about smacking things with pots and pans.