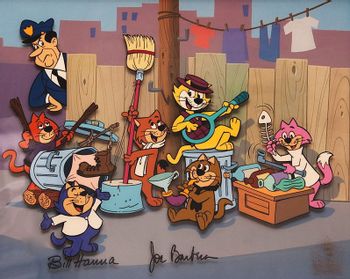 "Bangin' on a trash can
Drummin' on a street light."
— Doug, "One Little Voice"
Advertisement:

You've got music in your soul. You can feel the rhythm, see the crowd, and hear the notes play out even in the most deafening of distractions. But you've got a problem: you don't have any instruments. Maybe you lost yours, maybe there's no way to get them, or maybe, as is sadly often the case, you just can't afford it... either way, it doesn't matter. You can feel the music and you're not going to let something so simple as a lack of instruments stop you.

Anything is possible if you have the ingenuity to do it. Pick up a trashcan, bang on the lid, and make some drums. Pull together some shoestrings and make a guitar, and break off a lead pipe and make it into a trombone. Break out the stomping boots and the tap dancing shoes while you're at it. Pretty soon, you've got yourself a Trash Can Band, and before long the music just flows out. Even the A Cappella groups can do it!

Compare Everything Is an Instrument and Banging Pots and Pans, neither of which are unusual for such a band.