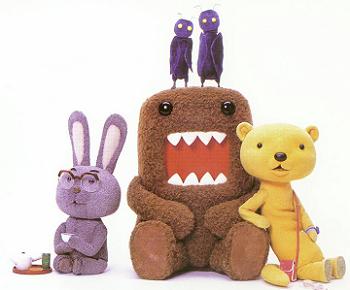 Domo TV is a series of television shorts featuring the former NHK mascot Domo, also known as "Domo-kun" (どーも くん). In his little world, Domo interacts with multiple anthropomorphic animals, expresses a childlike imagination at the world, and is obsessed with eating and watching TV. He also farts pink clouds when under stress or nervous. It's a wondrous world.

on the official YouTube channel and follows his adventures in the real world.