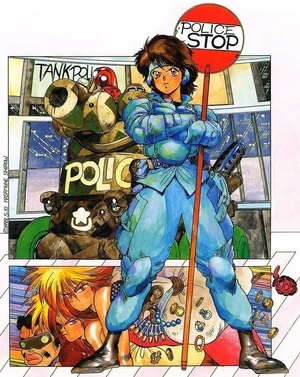 Feel the power that they got!
Advertisement:

In the grim darkness of the 21st century, civilization enters its final downward spiral. The world is ravaged by pollution and disease while armed sociopaths with military-grade weapons purport to uphold the law as they cheerfully slaughter dangerous criminals and innocent bystanders alike in creatively sadistic ways.

But enough about the news.

Based on a manga series drawn by the legendary Shirow Masamune (although altered greatly from its source material,) Dominion Tank Police covers three OVA series, the first of which came out in 1988. The story is set in a future Japan filled with so much bacterial pollution that people have to wear gas masks outdoors. Policing this crime-ridden dystopia is a police squadron comprised entirely of rag-tag tank-driving misfits — who may be an even greater threat to the civilians of the city than the criminals themselves are.

Though the premise of this over-the-top show may not be all that original, the characters themselves are loads of fun to watch, notably Leona Ozaki, the Shorttank of the series (who, appropriately, drives a short tank herself); Charles Brenten, the bloodlusting squad leader with a lifetime subscription to "How to Kill" magazine; and the Puma Sisters Anna and Uni, a pair of suspiciously overpowered android catgirl criminals.