Torture for Fun and Information 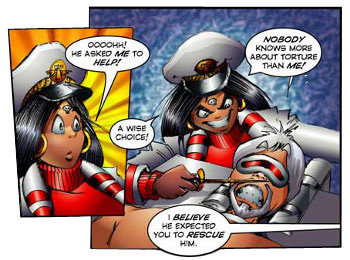 Bangladesh DuPree in a nutshell.
[Gene is beating up a crook]
Alex Drake: Is that strictly necessary?
Gene Hunt: No, but it's bloody good fun though!
— Ashes to Ashes (2008), season 3 episode 2
Advertisement:

A subtrope of Jack Bauer Interrogation Technique and Perp Sweating, Torture for Fun and Information is torture used for extracting information, in the manner of Jack Bauer, but played for laughs or audacious absurdity. When using Torture For Fun And Information, the interrogator isn't simply causing pain to a victim to get information - they're doing it creatively, and probably having far too much fun in the process. Most of the time, they already have the information, they just want to let off some steam while verifying it. While this is more likely to be in the repertoire of a Magnificent Bastard, a sufficiently dark Anti-Hero might be able to get away with it.

If there's any method to the madness at all — that is, the cop isn't just genuinely Ax-Crazy — it might be to make the suspect so terrified of how unhinged and unpredictable he is that they'd rather give up the information than find out.

May involve Interrogation by Vandalism, High-Altitude Interrogation, or False Roulette. Compare Cool and Unusual Punishment, which is what happens after you're charged. See also Torture First, Ask Questions Later, for when the torturer flat-out forgets to ask anything. Compare and contrast Torture Technician, who may be just as sadistic but is usually more chillingly professional about it, and Exalted Torturer, where the torture may or may not be Played for Laughs, but the torturer is portrayed as a hero.