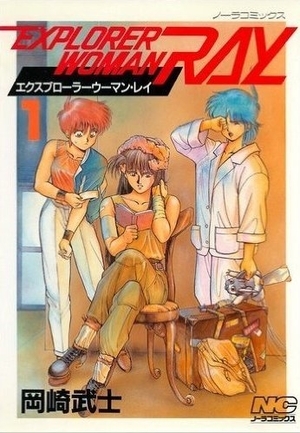 A fairly obscure two-part 1989 OVA series from electronics giant Toshiba (of all companies), based on a manga of the previous year by Takeshi Okazaki. Was licensed by Central Park Media for an American VHS release on the US manga corps label, but has not been released on DVD (or at all in the UK).

Archaeologist Rayna "Ray" Kazuki is in South America studying a mysterious civilization known as the Ords, who are commonly believed in-universe to worship the Sun but in fact were able to harness the power of light, a secret known to Ray and her grandfather, who left an artifact in her safekeeping which is key to unlocking this mysterious power, which bad guy (and Ray's grandfather's former assistant) Rieg Vader will do anything to possess. Into the mix come twin teenage girls Mai and Mami, who have stolen the artifact and travel from Japan to meet up with Ray in hopes that she'll help them in search of lost treasure they think exists.