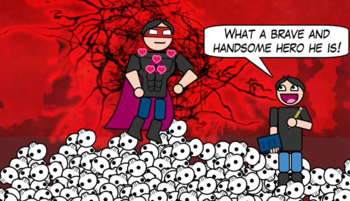 Yeah, sure is definitely The Hero alright. note  The "bad guys" he slew were innocents.
"Even though our hero does as much if not more damage than the villain, the writer will still make the story demand you root for him even as he slaughters orphans along with the couples who were about to adopt them."
— Terrible Writing Advice, "Grimdark"
Advertisement:

A Designated Hero is a character who, despite being presented as The Hero within a story, doesn't actually do anything heroic. The narrative paints their actions in a heroic light, despite their behaviour lining up to morally ambiguous or even outright villainous actions. A normal Anti-Hero is typically shown to be conflicted and struggle with choosing between right and wrong, but the Designated Hero is treated as unambiguously heroic. From the praise these Designated Heroes receive from other characters, the narrative, and perhaps Word of God, it is plain that the audience is expected to root for them. However, they often have only superficial virtues, with no Character Development and a free pass from the consequences of their actions (because they're already perfect and don't need to learn any moral lessons).

Note that Values Dissonance can sometimes be a factor with this, since the exact definition of what constitutes heroism has changed over time; a character that comes across as a Designated Hero to a modern audience might well have been The Paragon when the story was written in Feudal Japan or Ancient Rome. Of course, even in modern society, people will have different standards of what constitutes heroism between or within cultures. Such writing might inspire audiences to begin Rooting for the Empire, because they see the villains as "better" than the heroes.

The Inverse is a Designated Villain, who the narrative depicts as villainous despite not doing anything wrong. This is often because everything they say gets accompanied by an annoying smirk. These two reactions tend to go hand-in-hand, especially if the "villain" is considered such solely because they oppose the "hero". This is not a requirement, as a Designated Hero could easily oppose a genuine villain that they may be very similar to. This reaction to the writing can also be seen as the inversion to a Villain Protagonist, who is presented as the person that the story is about, but not as a person who guides the moral compass of the story; rather the opposite. A work with a sympathetic Villain Protagonist may attempt to invoke this reaction by making the hero who opposes them a Smug Super or some other deeply flawed and unlikable character. Ironically, a badly done Villain Protagonist can lead to audiences misunderstanding the author's intentions and be perceived as a Designated Hero.

If the character is publicly perceived as heroic and/or believes themselves to be a Hero, but is still shown to be villainous within the narrative context of the work, then they're a Villain with Good Publicity and/or a Knight Templar. If a character is a good guy on paper, but doesn't do much that's "heroic" by dint of the fact that they simply don't do much of anything and lack agency when they do, then they are a Pinball Protagonist. An extreme example of Designated Hero is when the character that a sensible work would treat as a monstrous villain is portrayed as The Hero or a Big Good.

Josh has some strong opinions on Sunny's character journey compared to Twilight Sparkle's journey from the two-parter.

Josh has some strong opinions on Sunny's character journey compared to Twilight Sparkle's journey from the two-parter.