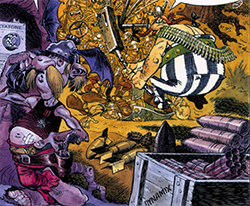 "Why don't you, like, you know, have the druid inventing modern gadgets?"

"It all started in the Seventies with the appearance of "heroes" like The Punisher and Wolverine. Instead of being hurled through a swirling dimensional vortex to seeming oblivion, a super-villain was now more likely to take a bullet to the brain, or a claw through the heart! Committing crimes and fighting super-heroes became dangerous!''
No wonder the bad guys starting acting a little rowdier — can you blame 'em? Suddenly, villains like Doctor Doom — who'd up till now pranced around with an air of menace but never actually did anything to anybody — started bumping off people left and right — some of 'em just for snoring too loudly!
— Marvel Year in Review 1993