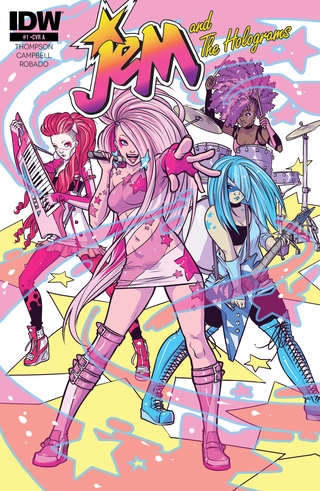 Our Stars.
A 2015 Continuity Reboot of the 1980s cartoon Jem from IDW Publishing.
Advertisement:

Jerrica Benton is a young singer living with her three sisters—Kimber, Aja, and Shana. They're in a band named "The Holograms" however Jerrica has issues with Performance Anxiety. This is getting in the way of them entering the "Misfits VS!" band competition. One day during a storm, Jerrica meets Synergy, a holographic supercomputer her recently deceased father built, who accidentally booted up thanks to a lightning strike. Synergy tells Jerrica that her father had a birthday present for her that he couldn't give to her. The present is a pair of star-shaped earrings with holographic projectors built in. Jerrica decides the best way to deal with her anxiety issues is to create an alter ego: Jem. Alongside Jem And The Holograms is another band, The Misfits. They're hosting a band competition where the winner wins a contract. The Misfits don't get along with The Holograms — with the exception of Stormer, who ends up dating Kimber, and even she isn't above spats with her sisters — and the rivalry between the two bands is a major plot point.

The comic is not related to the film that was released in the same year. They're based on the same property but were developed individually.

Much like the My Little Pony titles, it won't be part of IDW's Revolution event, which is a Mega Crossover between most of Hasbro's IDW titles, but IDW's staff do consider it to be part of the Hasbro Comic Universe- so there will be references (Ian Noble has a Misfits poster in his room), but they won't be part of the action. It was also recently announced that the Misfits will be getting their own spinoff title as well.

with issue 26, and had four special issues (two "annuals", one holiday special, and one Valentine's Day special). The Misfits solo series ended with issue 5. They were followed by a six-issue series called Jem and the Holograms: Infinite, in which the Holograms and Misfits traveled to an alternate universe. Following all these were a series of short-story collections, known collectively as "Dimensions". The fourth, published in February 2018, is planned to be the last issue and no new continuation of the story has been announced. In late 2018, the shared Hasbro Comic Universe was discontinued and many of its comics were cancelled or rebooted.

In January 2019, IDW released their 20/20 event, which saw many of their popular comics given one-shots set 20 years in the future or past. Jem and the Holograms 20/20 saw the now middle aged main cast attempting to put on a reunion concert. It's unknown whether or not this was meant to serve as the epilogue to the series or was set in an alternate future like the other 20/20 one-shots.

Jem and the Holograms contains examples of:

Alternative Title(s): Jem And The Holograms