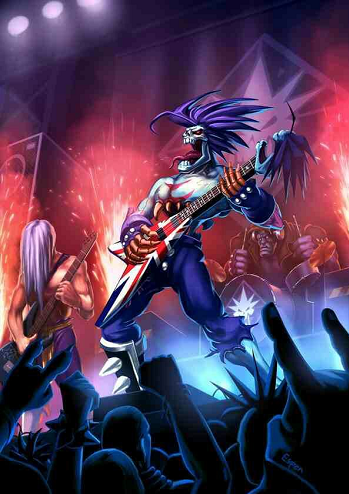 Some rockers are more rotten than others.
Advertisement:

Ah, rock and roll. Loud, violent, rebellious and, most importantly, powerful. Since these traits also perfectly fit a villain, in media, rock music is often associated with evil characters. Whether a simple Leitmotif or a full-blown Villain Song, these villains rock!

The association between rock music and evil is the origin of the trope The New Rock & Roll. If both the hero and the villain are associated with music, the latter will be harder. Considering the sheer popularity of rock music, this often results in Evil Is Cool.

Supertrope to Rock Me, Asmodeus!, where rock music is associated with Satan himself. Freaky Electronic Music is a Spiritual Successor, as electronic music has the same violent and rebellious association as rock and roll had in the past. Creepy Jazz Music, on the other hand, precedes both. Often counts as an Anachronistic Soundtrack if the work takes place before the 1950s. Compare and contrast The Power of Rock, where rock and roll is used to defeat the villain. May overlap with Musical Assassin, if playing rock music is the main tool of the villain, and with Autobots, Rock Out!, if the villains' rock music theme is heard when the heroes fight them. Compare All Drummers Are Animals, where drummers of rock bands are portrayed as savage and beastly, although not necessarily evil. Contrast Scary Musician, Harmless Music, where the musician only looks the part in a Dark Is Not Evil vein. See also Sex, Drugs and Rock & Roll, where rock stars or fans adopt a more realistic libertine lifestyle. Can overlap with All Bikers Are Hells Angels, as the biker subculture is heavily associated with rock music. Contrast Rock is Authentic, Pop is Shallow.

Lewis Legend, the Rock and Roll Zombie and one of the Dark Purveyors.

"I Need A Villain"

Lewis Legend, the Rock and Roll Zombie and one of the Dark Purveyors.

"I Need A Villain"