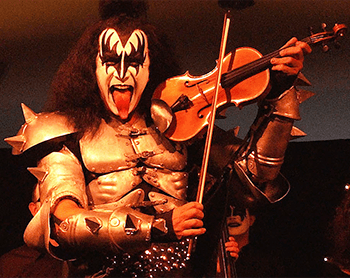 "There's nothing safer than someone who tells you he's dangerous."
— Patton Oswalt
Advertisement:

In music (especially in Rock and Roll music) the image an artist puts forth is almost as important as their songs. Almost.

Musicians are expected to be larger than life, so it's no surprise at all that hardcore rockers might want to look... well... hardcore, if only to meet the expectations of their fans. Every once in a while, though, you come across a musician who looks as hardcore as they come. His music? Not so much. This trope is all about when the tattoo-encrusted badass-wannabe puts out songs about love and puppies. Someone who's only familiar with the image might find all of their songs to be Surprisingly Gentle Songs.

Note that there's absolutely nothing wrong with having a hardcore appearance and doing soft music. Different strokes for different folks. This trope is about the dichotomy of the image, not whether or not the music fits any individual's tastes. Also, note that the extremes change over time: what was shockingly hardcore back in the day is tame now, and what's hardcore at present might be on par with Frank Sinatra once your great-grandchildren start forming their own garage rock bands.

Oddly, the inverse is equally or even more common — many of the bands that play the heaviest and blackest of metal are laid-back, fun loving guys.

Related to Rated G for Gangsta, Mean Character, Nice Actor and Dark Is Not Evil. See also Freaky Fashion, Mild Mind, Rule-Abiding Rebel, and Hidden Depths. Contrast Rotten Rock & Roll, where the musician (or the character with rock Leitmotif) is scary-looking and evil.