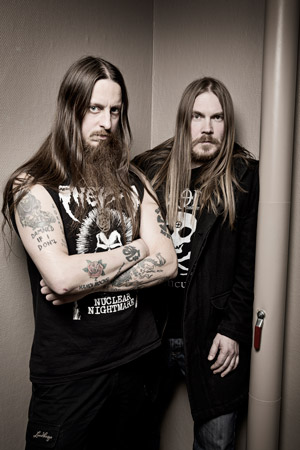 To think that these two are the only members...
Advertisement:

Darkthrone is a Black Metal band from Norway. They formed in the mid-late '80s as a Death Metal band named Black Death. The original lineup consisted of Gylve Nagell, Ivar Enger, and Anders Risberget (who left the band early on). Ted Skjellum and Dag Nilsen soon joined the band and they changed their name to Darkthrone. After recording and releasing four demos independently, Darkthrone signed to Peaceville Records and recorded their debut album, Soulside Journey. This was followed by the instrumental demo tape Goatlord, however the band decided to shelve this album rather than make it into an album proper as they became interested in Black Metal and changed their musical style accordingly. While recording their next album, A Blaze in the Northern Sky, the band members adopted pseudonyms — Nagell became "Fenriz", Skjellum became "Nocturno Culto", Enger became "Zephyrous", while Nilsen left after the album was finished. Darkthrone's third album, Under a Funeral Moon, saw the band shed all remaining Death Metal elements. Zephyrous left after the recording of Funeral, and the band has remained a two-piece ever since. Their fourth album, Transilvanian Hunger, had much rawer production than previous releases and was controversial for containing some lyrics and backwards spoken messages from the infamous Varg Vikernes and for the message "Norsk Arisk Black Metal" ("Norwegian Aryan Black Metal") on the album booklet. (This was changed to "True Norwegian Black Metal" on later pressings, and after the controversy that accompanied the album, Darkthrone issued a statement with their next album saying, "Darkthrone is certainly not a nazi band nor political band, those of you who still might think so, you can lick Mother Mary's asshole in eternity". Fenriz also later expressed remorse for remarks like the "Norsk Arisk Black Metal" label and an infamous quote from the same era about "obviously Jewish behavior", calling them "disgusting" and noting that he was going through a period of being "angry at several races"; despite being largely apolitical in his music, he now serves as a vice-councilman on the Oppegård city council representing the centre-left Liberal Party, whose platform explicitly supports immigration and multiculturalism).

Their contract with Peaceville complete, Darkthrone signed to Moonfog Productions (run by Satyr of fellow Black Metal band Satyricon) and released a string of somewhat lower-profile albums (including a version of the Goatlord demo with newly-recorded vocals) before returning to Peaceville again in 2005. The band's subsequent releases have incorporated influences from Punk Rock and traditional Heavy Metal, with these influences becoming increasingly prominent on more recent albums.

For most of the band's run, Fenriz has been the drummer and lyricist, while Nocturno Culto sang and played most guitar parts. This dynamic has shifted on newer albums, with both members sharing vocal and lyric duties roughly equally (the Total Death album is notable for having no lyrics by Fenriz at all, instead half the songs have lyrics by Nocturno and the other half have lyrics by various other Black Metal musicians).