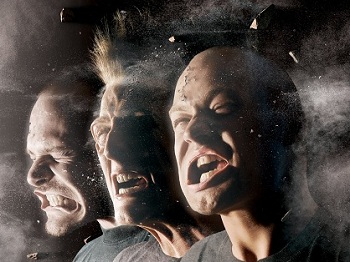 A three-piece Dutch group, Noisia (usually styled NOISIΛ, which is "VISION" upside down) — composed of Nik Roos, Martijn van Sonderen and Thijs de Vlieger — is one of the most popular acts of modern Electronic Music (most known for working in Drum and Bass, but they've dabbled in plenty of other genres).

Among their genre's scene, the group has gained high regard for their signature uses of distorted, resampled basslines and perfectionism towards sound design that lends to an extremely high-quality production value in their songs. Many have considered them one of the most important influences towards towards current electronic sounds, with many notable producers (such as Skrillex) citing them as direct inspiration.

They usually released their songs through their own 3 record labels (Vision, Division and Invisible Records), although they have also released material through others, notably deadmau5's label mau5trap.

In fall 2019, Noisia confirmed they would be splitting at the end of 2020, citing Creative Differences, while also announcing plans to continue releasing music until then and hopefully work together on occasion in the future. After some scheduling slips brought about by the pandemic, the group's final record released in May 2022.