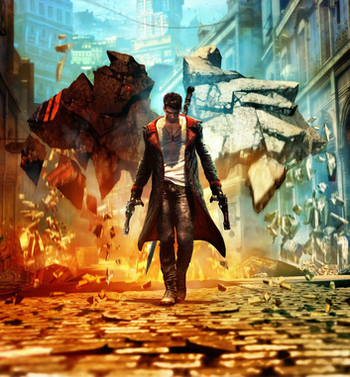 Gameplay combines multiple elements from previous entries, with further emphasis on platforming and aerial combos: the Stance System, for instance, now involves Dante switching between demonic and angelic powers on the fly in both combat and exploration segments. However, a large arsenal of weapons is still available, including the classic longsword, a demonic axe, an angelic scythe, and flaming gauntlets. Dante's signature Devil Trigger also returns, now allowing you to temporarily freeze time for even more carnage. Exploration and platforming makes use of the Malice, where Dante alternates between the gloomy-looking real world and a demonic parallel world with distorted architecture and vivid colors where even the city itself is trying to kill you.

DmC was released in North America and Europe on January 15, 2013 for the Xbox 360 and PlayStation 3, and on January 25 for Windows. The game was remastered with a Definitive Edition featuring all DLC included for PlayStation 4 and Xbox One as well as the graphical capabilities of the original PC version. New features include hard-locking on enemies, a higher difficulty mode beyond Dante Must Die called "Gods Must Die", new game modifiers such as Turbo (which speeds things up), "Must Style" (where enemies won't take damage until the Stylish Rank is S or higher), and "Hardcore" modes (which introduces gameplay changes that make the game a little closer to the old Devil May Cry titles), and a Bloody Palace mode for Vergil. There are also new costumes (such as a Devil May Cry 1-styled Dante outfit). Certain gameplay nuances were also tweaked (such as being able to damage enemies with anything when they previously required a specific weapon alignment to be damaged).

The game has a prequel graphic novel of its own, titled DmC: Devil May Cry - The Chronicles of Vergil, which depicts Vergil's first meeting with and recruitment of Kat, as well as his subsequent efforts to find the missing Dante. Its canonicity is debatable. There is also a Downloadable Content episode released after launch, called "Vergil's Downfall" that focuses on the namesake character.