Born of Heaven and Hell 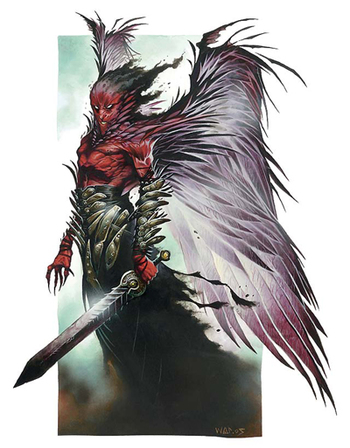 Born of Heaven and Hell is a being whose parents are from Heaven and Hell or its equivalent. Largely being part angel or God/Deity, and demon/Devil. They may be referred to as a Nephilim. This may be justified when Fallen Angels or Ascended Demons are involved.

More often than not they will be portrayed as an Anti-Hero thanks to the contradiction of their very being; while they may want to do good (Heaven), their actions would be seen as violent or destructive (Hell).

May face the brunt of the Half-Breed Discrimination from both species. If they are lucky they may be left alone. However, they may be targeted for death for either being born or fear their hybrid nature would make them more powerful. If not, they may actually be accepted by one of the groups. Though, they will feel uneasiness about their hybrid nature.

A Fusion Dance or a case of one gaining attributes of the other can accomplish the same effect.

Most likely the end result of a literal Angel/Devil Shipping.

Sub-Trope of Child of Two Worlds; might even overlap with Oxymoronic Being. If they have supernatural abilities, they might manifest as a Yin-Yang Bomb.