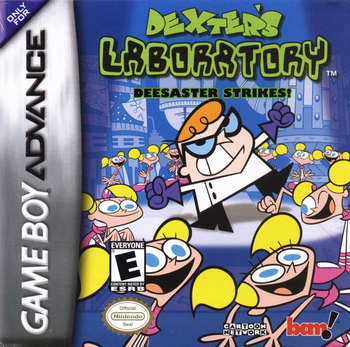 The story is relatively simple and true to the show's tradition. Our protagonist, Dexter, boy genius is working on his latest invention when his rambunctious older sister Dee Dee sneaks into the lab and messes around with his Clone-O-Matic machine. The machine not only clones Dee Dee, but splits her up into many tiny clones of herself. One Dee Dee was bad enough, now Dexter has to deal with hundreds of them!

The miniature Dee Dees now run amok in Dexter's lab. Its up to Dexter to hunt them all down, return them to the Clone-o-Matic to put Dee Dee back together, all before Mom calls him to dinner.

Deesaster Strikes has a simple structure. You take control of Dexter as he explores different sections of his titular lab in his mission to capture the Dee Dees. He can grab them with his grappling arm, and send them through the chutes spread throughout the levels, which stores them into his Clone-o-matic. However, its not that simple, Dexter also has to fend off rouge robots out to kill him, avoid deadly traps and fix broken machines with various tools, some of which are hidden inside of enemies.