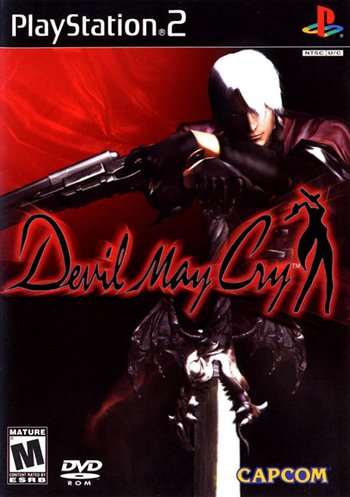 Devil May Cry is a Stylish Action Hack and Slash game developed by Capcom and originally released for the PlayStation 2 in 2001. One of several projects that spun off from attempting to develop Resident Evil 4, it is notable for codifying many tropes used for 3D Stylish Action games, and for being the first original project worked on by Hideki Kamiya.

Taking place in the modern day, an infamous demon hunter known as Dante is approached by a mysterious woman named Trish, who informs him that Mundus, the lord of the Demon World, is attempting to invade the human realm, and the place to stop him is an abandoned castle on Mallet Island. Dante, as the only known surviving son of the Legendary Dark Knight Sparda, is the only one who stands a chance.

Gameplay consists of exploring the castle and its various environs in a style that resembles 3D Metroidvania, while the combat uses timing-based melee combos and ranged gun attacks to battle the hordes of demons infesting the place — getting graded on how stylish you fight in combat and rewarded with more currency depending on your performance. Dante is equipped with a sword and two pistols named Ebony and Ivory to start off with, but acquires more weapons over the course of the game. Occasionally, puzzles must be solved in order to move on, and there is an emphasis on Metroidvania-esque backtracking to previous locations to unlock new paths forward.

Aside from the main game, there are also supplementary materials and spin-offs for the first Devil May Cry, such as a Light Novel prequel released on 2002, and a 2004 Comic Book series published by a Canadian publisher Dreamwave Productions that is (loosely) based on the game's story.

This is the game that started the Devil May Cry series. The success of the game convinced Capcom to develop a sequel, and Devil May Cry 2 arrived in 2003.