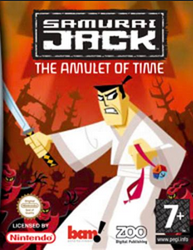 Join Samurai Jack on a journey of honor and revenge through an advanced world filled with wonders and help him drive out evil once and for all.
"Samurai Jack™ - A warrior unlike any other, trained by masters of weaponry and combat from all corners of the globe, he hails from the past, but was sent far into the future by the shapeshifting wizard Aku. His mission: to find the missing segments of the Amulet of Time which will allow him to return to the past, fufill his destiny, defeat Aku and save the world from his evil."
— Back of the box
Advertisement:

Samurai Jack: The Amulet of Time is a 2003 metroidvania game developed by Virtucraft Studios and released for the Game Boy Advance. Based on the cartoon series, the game follows Jack's quest to collect the pieces of an amulet that supposedly can send him back in time and allow him to finally undo the future that is Aku. Yeah, like that would be settled in some obscure licensed game.

As can be expected from the genre, Jack travels across a variety of maze-like areas while collecting gear to increase his stats and relics that allow him to break barriers and jump over tall ledges.

Tropes back, back in this game include: