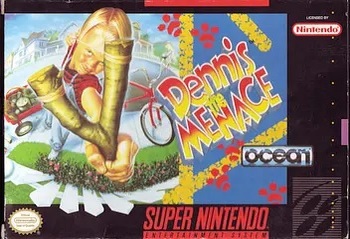 The plot of the game is that Switchblade Sam has stolen Mr. Wilson's coin collection and kidnapped Margaret and Joey, so Dennis has to find the missing coins, defeat Sam, and rescue his friends.

You play as Dennis, and the goal of each level is to find five of Mr. Wilson's missing coins so Dennis can return them to him at the end of the game. With the exception of Mr. Wilson's house, which consists of a single stage, and the Park, which has six action stages, each world has four action stages and one boss stage. Dennis can use his squirt gun, slingshot, and peashooter to attack enemies.