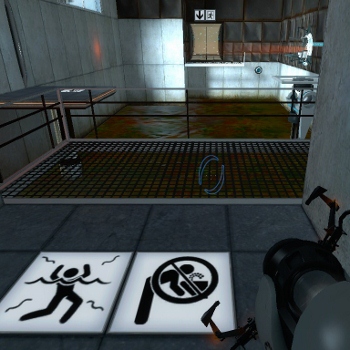 Water with a tainted color (usually not blue) that harms or kills the character upon contact. Usually explained as water with some kind of toxin in it, or (shudder) not water at all.

It is a good way to make a video game character avoid pits of liquid without invoking Super Drowning Skills or going as far as Lava Pits. Usually appears in games with regular swimmable water as well. Sometimes it is possible to clear up the grimy water to make it swimmable. Rarely, just the surface causes injury.note it is implied to be something floating on it that is harmful.

Often involved in Rise to the Challenge levels, as well as Bubblegloop Swamp ones. The classic term, back before Marathon and Duke Nukem 3D introduced swimming, was "hurt floor", since these areas were effectively just floors that dealt damage.

Not to be confused with Hazardous Water (where the water doesn't deal damage directly but still poses a risk) or Mucking in the Mud. See also Lava Is Boiling Kool-Aid. Inversion of Healing Spring.

Introduced in Test Chamber 08, goo is a hazard that will kill the player if you don't escape from it.

Introduced in Test Chamber 08, goo is a hazard that will kill the player if you don't escape from it.