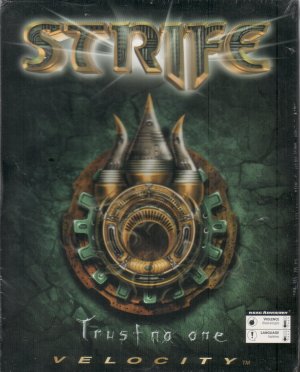 Fight for the Front and freedom! Move out!
You are a wandering mercenary, led to the small town of Tarnhill by rumors of conflict between The Order, a well-equipped religious dictatorship, and The Front, the rag tag resistance movement. While searching for The Front you decided to take a brief rest somewhere that you thought was safe. The Order acolytes have been rounding up all suspicious characters in the area. Yes, you happen to be one of them. What they didn't expect, though, is the knife you keep concealed for situations just like this one...
Advertisement:

A comet struck the planet, unleashing a virus that ran rampant and killed countless human beings. Those that were infected and survived began to hear the voice of a malevolent god known as The Entity in their minds, and began to worship it. They formed a cult known as The Order and began their conquest of the planet, using technology far superior to those outside The Entity's sway. Their brutal reign lead to the creation of The Front, a resistance movement dedicated to overthrowing The Order that, as of recently, has been stymied by their lack of manpower and The Order's technological advantage.

That is until you came along, of course.

Released in 1996 by Rogue Entertainment, Strife is the last commercial game to use id Software's Doom Game Engine (now officially known as id Tech 1). It featured hub-based levels and small RPG Elements such as cutscenes, Dialogue Trees, shops, a rudimentary leveling system and an actual, relevant plot. Unfortunately it never received much attention or commercial success due to it using a more "primitive" engine compared to what was out at the time, and it was overshadowed by id's latest technology-advancing game that was slated to be released a month later. Despite this, it was eventually rediscovered by fans of 90's shooters and became something of a Cult Classic.

Strife was considered abandonware for a long time due to Rogue Entertainment no longer existing, and the game can be played on modern operating systems with Doom source ports such as ZDoom. At the tail end of 2014, Nightdive Studios acquired publishing rights for the game, and on December 12, 2014, the game was re-released via Steam as Strife: Veteran Edition

for Windows, Macintosh, and Linux-based PCs. This updated version of the game features many new enhancements such as high resolution modes and widescreen support, OpenGL rendering capabilities, dynamic lighting and bloom, rebindable keys, and restores lost features of the original game.

Not to be confused with the MOBA game of the same name. In fact, the Steam release was retitled The Original Strife: Veteran Edition.