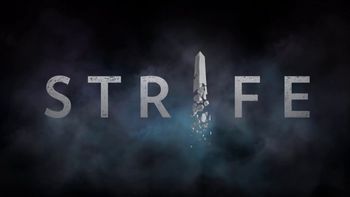 Welcome to the world of Strife!
Strife is a MOBA game by S2 Games, previously known for their work Heroes of Newerth, and launched in early 2015.
Advertisement:

All is not well in the world of Strife, a planet surrounded by 6 other planes, each embodying a different fantasy genre- Gale, a world of medieval fantasy, with knights, assassins and dragons- Lyrie, a land of jungles, forests and seas- Nestra, a land cloaked in darkness- Tempra, a frozen glacier where few survive-Vorbis, the most highly advanced plain with rockets, lasers and jetpacks- and Sheol, the underworld of suffering and war. Sheol has been sealed away, but a prophecy states that one day the seal will break, and Sheol will invade the other planes. Also, the only key to opening Sheol has gone missing. The Keepers of Light, powerful beings who watch over the world of Strife band together to form the Army of Light and the Arena of Strife, where powerful beings from across the planes do battle to earn gold, test themselves, find revenge and more. As the champions of Strife do battle, the seal on Sheol weakens ever so slightly, and the fate of seven realms is at stake.

Strife is a traditional MOBA like League of Legends and DOTA 2, but with a few added twists of its own- for starters, the game blends several elements from DOTA and League together into one cohesive experience. League's locking camera system, emphasis on turrets doing loads of damage and boss monsters to kill in the jungle are here, while Dota's nuances like couriers, jungle farm and item dependency are also mingled in. This is also combined with Strife's nuances of it's own, such a lack of healing items, shared gold for killing creeps, it's own unique boss monsters (such as Kyros, a monster that when killed will push a lane), and an incredibly fast regenerating health/mana system that kicks in when a person has stayed out of combat for long enough. Despite this, Strife has a fairly in-depth tutorial for newbies to the genre. All of these features blend together to create a fast-paced, lightning-quick MOBA that is meant to provide as much fun and as little downtime as it possibly can.

Strife was formerly available on Steam, and was its own client, but S2 Games and its games' servers closed down in 2018. However, some fans put together a "Community Edition" with its own client and servers

to continue playing the game.