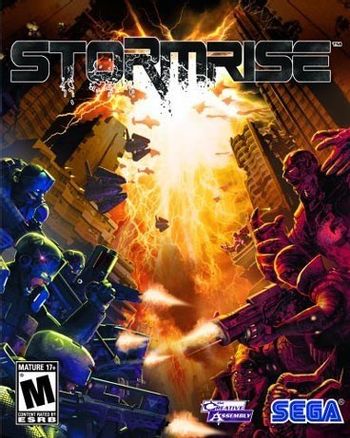 Only one shall rise.

In the future, the Earth has become nigh-inhospitable thanks to a experiment with a force-field that was supposed to improve air quality and stop global warming Gone Horribly Wrong, unleashing a massive storm that engulfed the entire earth. A few thousand privileged people avoided destruction by hiding underground and spending hundreds of years in suspended animation, while the people who had to remain on the surface were forced to adapt to the harsh conditions, eventually turning into a race of mutants referring to themselves as the Sai. When the people who chose to hide from the storm underground—now known as the Echelon—return to the surface they find a world that has changed. While initially the two factions manage to uphold peace, eventually lack of trust and divided loyalties lead to a civil war between the Sai and the Echelon. And you are right in the middle...

Stormrise is a real-time strategy game developed by Creative Assembly, creators of the Total War series. It picks up the popular post-apocalyptic theme, presenting a civilization that has begun to once again emerge after a catastrophic atmospheric event. Two warring factions arise from the rubble: the Echelon, a technologically advanced race that endured the planet's fallout by way of self-induced hibernation, and the Sai, a tribal society that adapted to the new environment and evolved.

Unfortunately, it was very poorly received due to being released in an essentially half-finished state, absolutely loaded with bugs to the point of making some missions unplayable. Its most-touted feature, intended to allow the player to easily take command of their troops, regardless of the location, was also found to be very difficult and annoying to use.

Due to its very poor sales, the game was abandoned soon after release.