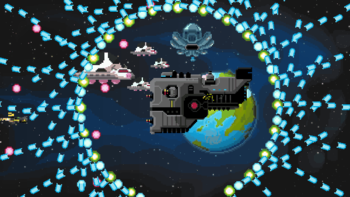 Steredenn is a Horizontal Scrolling Shooter developed by Pixelnest Studio, and published by Plug In Digital on Oct 1, 2015. It can be found on Steam, Xbox One, PlayStation 4, PlayStation 3, and Nintendo Switch.

Your Mothership has just been attacked by Space Pirates - in the middle of the tutorial, no less! Take your Space Fighter and go teach those jerks a lesson.

Each level in Steredenn is comprised of a sequence of randomized attack waves, requiring you to think fast and adapt quickly as the game throws different challenges at you; one minute you might be negotiating a laser corridor, the next, you might be being bombarded by missile frigates. To add to the chaos, stages may also have random modifiers, such as meteor showers or an off-screen laser cannon trying to zap you.

If you make it through all of that, you'll then have to hope your ship is in good enough shape to face the boss. Defeating the boss restores your armor and leaves you fresh and ready to face the next stage, and additionally, you get to select a perk for your ship. The first time you defeat a boss unlocks it in the "Arena" mode, which allows you to re-fight that boss at your leisure, using any loadout of weapons you have already found in a normal run.

At the beginning of the game, your ship is equipped with just a Boring, but Practical rapid-fire blaster weapon, but you'll quickly get the opportunity to replace it. Weapons come in a wide variety of categories: bullet weapons, energy beams, autonomous drones, and even some melee weapons. Choosing a good weapon combination forms part of the game strategy; the ship can only hold two weapons at a time, which forces the player to make quick decisions as to which weapon to discard or keep when a replacement becomes available. Every weapon has merits and drawbacks, and each kind of enemy reacts differently to each one (indicated by the color they flash when you hit them).

There is also a "Daily Run" mode which allows you to compete for the highest score of the day with other players of the game, with the caveat that you only get one attempt at any given Daily Run.