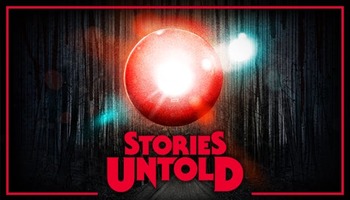 Stories Untold is a multi-genre horror game created by developer No Code. The game features four different episodes, each one with a different story and twist ending.

In the first episode, The House Abandon, the player is sat in a room playing a classic 80s text-based game, only to discover that the very house he is in is the house being explored by the protagonist.

In the second episode, The Lab Conduct, the player is working as a volunteer in a laboratory regarding a top-secret experiment that leads to his mind melding with that of a powerful alien and, through the alien's coercion, killing all of the employees in the building.

In the third, The Station Process, the player is working at a remote Arctic station, in which he must process radar signals and combat an antagonistic "thing" that is attacking him and his coworkers.

In the fourth and final episode, The Last Session, the connection between all the previous stories is revealed...

The game is available for purchase on Steam here.