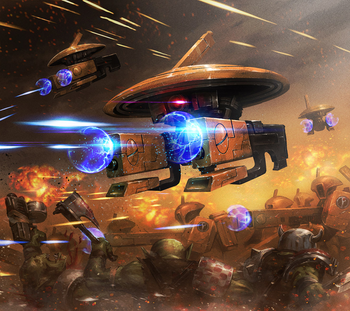 "Never send a human to do a machine's job."
Advertisement:

An Attack Drone is an automated weapon controlled by a larger system. The archetypal Attack Drone is basically a gun, a propulsion system to move it, and an AI with sensors to carry out commands. This can allow the controller to attack an enemy with a greatly reduced risk of getting themselves shot, or allow them to strike from multiple angles, or simply utilize more firepower by themselves.

The major difference between Attack Drones and Mecha-Mooks is a matter of size and shape. A Mecha Mook is usually in the size and/or shape of a humanoid or animal, while a drone is aircraft-like or entirely mechanical in appearance (though there is some crossover in the form of Spider Tank drones). In short, a Mecha Mook may look, if only on the most basic levels, like a person or animal, while an Attack Drone is unmistakably a thing. The other difference is, as noted above, that an Attack Drone is directly commanded or controlled, directly tied to said controller as an extension of it as opposed to the more independent Mecha Mook. Also, an Attack Drone is more often than not smaller than its controller, and in many cases can be carried until it is ready to be unleashed.

These are a common accessory in shoot-em-ups and games in space settings, which aids the player in battle. It is detached from the player's avatar and will follow the main avatar around in battle. Often called "options" (as in Gradius), "bits" (as in R-Type), or "funnels" (as in Gundam), or by the generic term of endearment "gunbuddies".

Not to be confused with Drone music or Drone Tactics. Compare Attack Animal (which might overlap if the drone is intelligent enough to act on instructions, rather than direct control). Contrast Orbiting Particle Shield. Might be deployed by the, well, Drone Deployer. Or Enemy Summoner, if they summon the drones via Functional Magic.