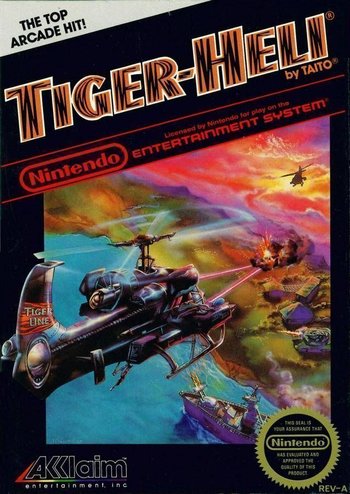 Tiger-Heli is the one of the very first games by the Japanese developer Toaplan, and was originally a 1985 arcade game, which later received a very successful NES port. It's a classic Vertical Scrolling Shooter, in which you control a small attack helicopter across the four huge rolling stages full of enemies and other stuff to blow up. It was arguably the first ever title to bring the "smart bomb" into the world of shmups, as any of the heli's two bombs destroyed all enemies and their bullets on the screen. It also featured side- or forward-shooting Attack Drone helicopters, similar to last year's 1942.

As one of the first vertical scrollers, Tiger-Heli is somewhat short, but it still contains many of the elements of later Toaplan titles. Stages are big and detailed, and enemies are numerous and well-placed It was popular enough to warrant a Spiritual Sequel of sorts, Twin Cobra.

, a Compilation Re Release for Nintendo Switch and PlayStation 4 as part of the M2 ShotTriggers series. It also includes the NES port of Tiger Heli, the PC Engine, Sega Genesis, and NES versions of Twin Cobra, a co-op 2-player version of Kyūkyoku Tigernote Twin Cobra also has co-op 2-player but additonally features some extra differences, Guardian available as add-on DLC for the digital version and included with the physical version, and a download code for Teki Paki. Kyūkyoku Tiger Heli was released on October 28, 2021.

YOU HAVE TWO BOMB
AND TWO LITTLE HELI
BONUS 20000 POINTS