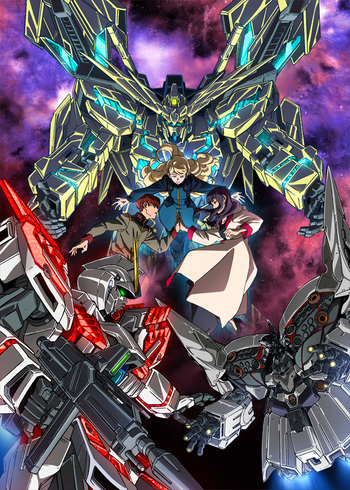 Mobile Suit Gundam Narrative (NT) is a 2018 anime film in the Gundam franchise. It is based on the 11th Gundam Unicorn novel, Phoenix Hunting. The movie premiered on November 30, 2018 and was the first installment in Sunrise's "UC NexT 0100" project, which covers the events of the next 100 years in the Universal Century timeline after Mobile Suit Gundam: Char's Counterattack.

The story is set in UC 0097, one year after the events of Mobile Suit Gundam Unicorn, when the conflict called the "Laplace Incident" led to the dissolution of the Neo Zeon remnant group "The Sleeves". Both the Banshee and Unicorn Gundam were locked away in secrecy while Laplace's Box revealed the original draft of the Universal Century Charter, making the existence of Newtypes public.