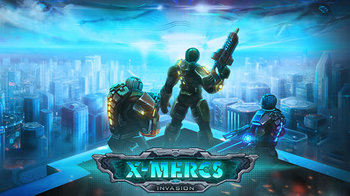 Mercs of Boom (originally called X-Mercs or X-Mercs: Invasion) is a freemium Turn-Based Tactics game, developed in 2015 for iOS by Game Insight. The game has since been ported to Windows.
Advertisement:

The style of the game is heavily reminiscent of XCOM: Enemy Unknown, although the setting is more akin to Command & Conquer or Defiance.

In 2040, a meteorite delivers a strange blue mineral to Earth dubbed "Advinite". The rapidly-spreading advinite proves to be a valuable resource, but its unique radiation has proven to be dangerous to living things, mutating terrestrial life forms into unrecognizable shapes. As animals mutate into dangerous monstrosities, humanity comes under siege, unprepared for nature turning against us. Millions are killed. Governments collapse. Cities are evacuated. Survivors live in heavily fortified and shielded megacities. In the resultant Crapsack World, two power blocs are formed, similar to the old Cold War: the libertarian and economic North Atlantic Defense Alliance (blue) and the totalitarian, industrial, and scientific Red Dragon Union (red). The two entities exist in a state not unlike the old Cold War. The Union boasts a large, well-equipped standing army, while the Alliance tends to rely more on the large number of Private Military Contractors that have sprung up following the crisis. The delicate state of peace is maintained by the World Council, who oversee everything (literally) from their Space Station in orbit.

The player is put in charge of one such PMC with an Elaborate Underground Base that can be expanded as needed. The world is split up into territories (blue, red, or neutral). You send a squad of mercs (scouts, heavies, and snipers) on various missions to these territories. The missions can be a part of a Story Arc or randomized. The enemies are more frequently mutants, but there are also plenty of missions that pit the player's PMC against rival PMCs (including other players' bases), criminal gangs, Alliance or Union forces, and aliens. In the base, the player can research new technologies in the labs and produce new equipment in the armories. As your mercs level up (through kills), you can choose new skills from the options available to that level. If a merc is killed in battle, he or she is placed in a cryopod, at which point the player has a choice: incinerate the merc (there are a limited number of cryopods) or revive him/her via one of two methods (normal revival, which takes time and reduces the merc's level by 1, and turning him/her into a cyborg, which retains the level and skills and also unlocks new skills but requires a special item). Events on the base use Real Life time (e.g. if you start the production of a medkit, you can close the app; when you open it 10 minutes later, the medkit will be ready). Naturally, given the freemium nature of the game, certain processes can be sped up or improved via Real Life money. Research and production require money, a certain number of scientists/engineers, and certain items that can either be obtained as mission rewards or purchased on the market (not all items can be purchased, such as mutant corpses).

The mission mechanic is very similar to XCOM. Each merc gets two action points per turn, which can be used to move a certain distance, shoot, reload, use items, or engage sentry mode. Snipers require both action points to shoot their primary weapon, while most other weapons can be fired up to two times per turn (i.e. firing a weapon does not end the turn). Sentry mode is identical to "Overwatch" in XCOM in that it allows a merc to interrupt an enemy's movement with a shot. Cover is important, as it reduces the chance for an enemy to hit your merc and also reduces the chance of a Critical Hit. Missions tend to be fairly short, compared to XCOM, and levels are small. Story Arc levels are larger.

As of the end of 2021, the game has been removed from the App Store and the Google Play Store. While those who still have the game can open it, with the servers shut down, the game cannot be played.