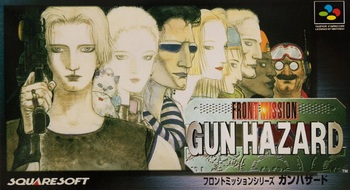 Front Mission: Gun Hazard (フロントミッションシリーズ ガンハザード) is a side-scrolling role-playing shooter video game developed by Omiya Soft and published by Squaresoft, and was released in Japan on February 23, 1996 for the Super Famicom game console. Gun Hazard is the first spin-off entry and the second entry overall in the Front Mission series. It takes place in a completely separate universe from the other Front Mission games.