We Will Use Lasers in the Future 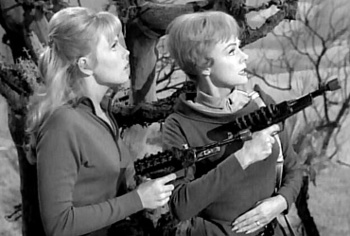 Behold! The far distant future year of 1997, when every well-dressed woman will be accessorized with a laser gun.
"Wait a minute, this is the future. Where are all the phaser guns?"
— Simon Phoenix, Demolition Man
Advertisement:

Much of classic, and occasionally modern, sci-fi is obsessed with the concept that in the future, the predominant weapon will be some form of Ray Gun. Even if the work is set mere 20 Minutes into the Future, laser weapons will be invented or introduced by aliens, scientists, spies or supervillains.

The reasons for this may be manifold.

This trope has two variants (note that these are not mutually exclusive):