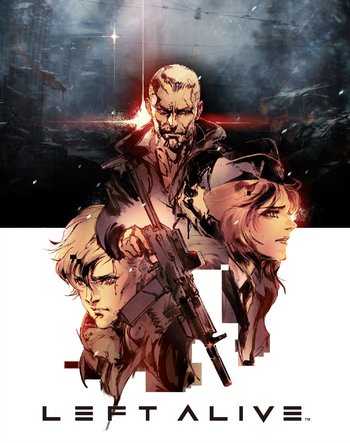 HAS HUMANITY LEARNED NOTHING
ARE THEY TO LIVE, OR LET LIVE
— Tokyo Game Show 2017 Trailer

Left Alive is a Third-Person Shooter developed by ilinx and Silicon Studio (a pair of development team that primarily focused on mobile games), published by Square Enix for the PS4 and PC. The game was directed by Toshifumi Nabeshima and produced by Shinji Hashimoto, with character design by Yoji Shinkawa and mechanical designs by Takayuki Yanase.

The game is a spinoff of the Front Mission series, taking place in between the events of Front Mission 5 and Front Mission Evolved. Unlike in the main series, however, Left Alive focuses on the experience of being a foot-soldier struggling to survive on a battlefield dominated by Wanzers. Players will see the events of the game's story unfold through the eyes of three characters embroiled in the Garmoniyan invasion of the Ruthenian city of Novoslava: Mikhail Alexandrovich Schwarov, a rookie Ruthenian Wanzer pilot with a habit of getting in trouble with his superiors; Olga Sergeevna Kalinina, a Novoslava police officer who left the military after the death of her daughter; and Leonid Federovich Ostermann, a former soldier-of-fortune now aiding the cause of a local resistance group.

Left Alive was announced during Sony's 2017 Tokyo Game Show press conference and was officially released on February 28, 2019 in Japan and on March 5, 2019 for the rest of the world.