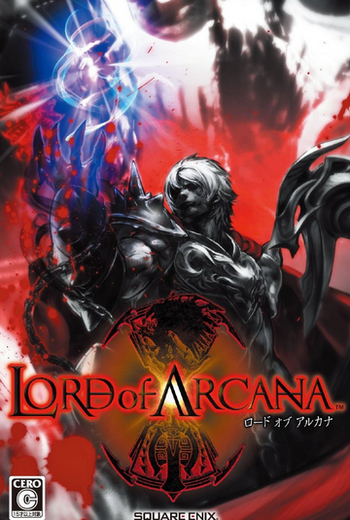 "Slaughter is the route to all power."

Square Enix's answer to the Monster Hunter franchise, with a lot less realism and a lot more gratuitous violence. Developed by Access Games, Lord of Arcana is a Spinoff of Lord Of Vermilion, a Collectible Card Game that was incredibly popular in the arcades of Japan. It was released in 2010 in Japan in 2011 globally.

Lord of Arcana features you as a powerful warrior who makes a deal with the gods to travel to the world of Horodyn, giving up your memories and former strength as payment. Horodyn is the home of the Arcana, a mysterious dark force that its first king used to conquer the world in a mere nine days. Now you've come to claim that forbidden power for yourself.

The story is mostly inconsequential and can be ignored entirely if you please. Gameplay consists of taking missions from the "Slayers' Guild" then heading out to kill certain monsters or collect 20 Bear Asses. When you've completed enough missions, you can take on an Arcana Release quest, fighting one of the eight legendary beasts trapped within the Arcana to claim its power for your own. Like Monster Hunter, enemies drop parts that can be crafted into new equipment or items. Lord of Arcana also features Harvesting, where you can attempt to use your Arcana power to transform a defeated monster into a Monster Core, a valuable resource for Item Crafting.

While Monster Hunter took a realistic edge in its combat, Lord of Arcana opts for Hack and Slash. Encountering enemies whisks you away to a separate battle field, and your moves are often more flashy than powerful. Defeating an enemy while locked-on allows you to use a Coup De Grace, a Finishing Move that is less of a Mercy Kill and more of a ridiculously violent cutscene death. You even have to finish off boss monsters with a Melee Duel, a combination of Cutscene Power to the Max and Press X to Not Die.

A sequel called Lord of Apocalypse was released in 2011, featuring two new weapon types, NPC mercenaries that you can hire to go on quests with you, and a more substantial plot (with named characters and everything!)

Lord of Arcana provides examples of: